Wakasa, Tottori – Tucked Away in the autumnal mountains of Tottori, in western Japan, Wakasa Railway struggles to survive. The number of passengers has gradually decreased due to the depopulation of close neighbours in the last 14 years. As passengers have reduced, the local railway firm’s revenue has shrunk, especially with the outbreak of the covid-19. Yet, the railway firm has never given up despite such a harsh business environment, trying to protect local transport.

Wakasa Railway started its operation in 1987 as the third sector, inheriting the equipment from the Japan Railway Company. In the beginning, the railway company had maintained about 600 thousand passengers per year, but in 2010 riders were reduced to 380 thousand due to the decreasing number of primary users commuting to a neighbouring high school. As a result, the transport company set up its strategy to revive, consisting of several tactics.

One of the company’s tactics was to transfer the railway company’s property, like stations and railways, to Yazu and Wakasa towns laid the railroad to avoid the heavy burden of operational costs. The subsidies from the towns enabled the railway firm to offset its red. Meanwhile, Wakasa Railway started to be responsible for its train service. Despite using the unique idea, the railway has never reached its vast surplus. The severe business environments, such as Depopulation, motorization, and the pandemic outbreaks, have continuously forced the local company to be on the verge of disappearing.

Yet, Wakasa Railway was determined to grapple with the problems. “Envisage vision to develop not only our company but other concerned parties such as administration, the local businesses, and the residents are important,” Masahiko Yabe, a senior representative manager of Wakasa Railway Company, said. “Disappearing the railway means disappearing Wakasa town.” He heightens the sense of crisis.

The railway has morphed into tourist-oriented trains using its retrospective resources such as stations, train cars and scenery. To make the most of these advantages, the railways asked famous train designer Mitooka Eiji, who had designed a luxury train, NANATUBOSHI, operated by JR Kyushu. Mitooka’s designs have been so stylish as to revive the local transport company, attracting new users gradually, including motorbike riders. 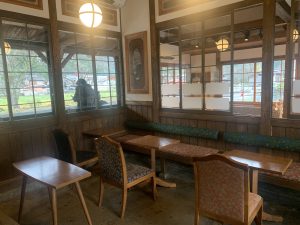 The riders of Hayabusa, a well-known Suzuki motorcycle, gather at Hayabusa Station, which belongs to the Wakasa line, once a year. A common name, “Hayabusa”, has brought about this event. Now, Hayabusa Station has become a mecca for Hayabusa riders, enabling the company to get a subsidy from Suzuki Motor Corporation. A Hayabusa rapping train car runs on the railway, coming into spotlights. This tactic has been successful.

These challenging inspired the local economy. A butcher produced an amazing retort curry called Wakasa Railway Currey, aimed at the resurgence of the railway, containing abundant beef. Despite a bit high price, JPY 2,160, the retort curry is popular among railway enthusiasts. It has already sold 500 boxes now, aiming for 2,500 sold.

Difficulties as Wakasa Railway are facing, the railway is trying to overcome obstacles while being beloved by its supporters. The rails of the company are still going on. 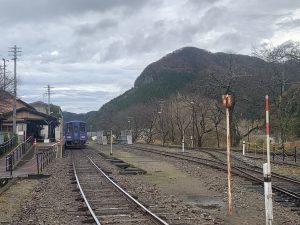 Remark: This article is a special edition