Matsue – Splendid autumn weather brought  Matsue to highlight the moment, resounding drums and bells in time to a musical accompaniment, Matsue’s festival lovers dressed in the matching uniforms called “Happi” proudly paraded through streets shouldering a portable shrine that set the Japanese god for celebrating the new year on a pedestal. An order by an elderly headmaster of a neighbourhood association made his group halt walking. Still, the member beat drums at the centre of Matsue Ohashi bridge to show their performance to spectators. The following portable shrine shouldered by another neighbour block also marched with its unique musical accompaniment at the corner of the bridge. Dogyouretsu, or the Drums parade, was held on the 16th of October.

Dogyouretsu is one of the most significant festivals in Matsue, making the tranquil Matsue’s residents exuberant, setting their spirits on fire. It is said that the origin of the event was to ascend the throne of the emperor Taisho. More than 100 years see the festival except for the wartime period. The groups are members of each town’s neighbourhood association, counted from 100 to 130 people. The members prepare for the divine service with hard training to create an esoteric rhythm with drums. Hence, becoming a member of the groups is very honourable for them as a representative of the towns. 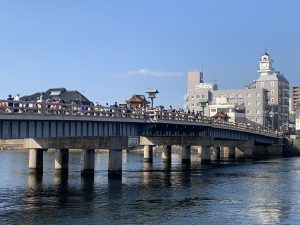 The Matsue tradition still hands to the next generations.