Japanse countrysides have its unique banquet. Shimane prefecture also has appetizing cuisines. The famous food in Shimane is Izumo Soba(buckwheat noodles), Corbicula Clams, and Ayu(sweetfish). These entertain not only locals but also tourists.

The locals in Shimane have traditionally eaten Izumo Soba for a long time. This meal used to be given as a present to the Tokugawa Shogunate in the Edo period because it tasted well. Ordinary Sobas, Edomae(Tokyo) or Shinshu(Nagano) Soba, have a whitish appearance and don’t have stickinesses. On the other hand, Izumo Soba has features: aroma, sweetness, stickiness, and blackish colour. These features are created by its unique milling technique of utilizing buckwheat chaffs. Buckwheat in this area is a special breed. The significant difference in temperature between daytime and nighttime in Okuizumo, where a good seed is cultivated, is remarkable. The climate in Okuizumo gives Izumo Soba plenty of flavours. The original seed of Izumo Soba was once on the verge of destruction. Yet Shimane Prefectural Agricultural Res. The Center helped to revive the seed. Izumo Soba has two ways of recipes. One is Soba with hot soup. The other is the one called “Warigo Soba” in the prefecture. Warigo Soba is served in 3 or 5-tiered boxes. The three boxes are often filled with three different toppings: an egg, ginger, and red pepper powder. Soba lovers all over Japan come to Shimane to eat Izumo soba. 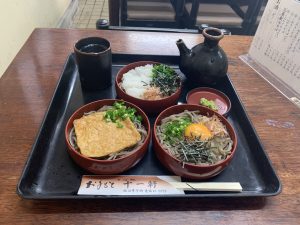 Lake Shinji, where common freshwater clams live, is in eastern Shimane. Lake Shinji allows fishermen to catch the most significant number of clams in Japan. The early morning corbicula clam fishing is one of the famous landscapes in the lake. Three types of corbicula clams live in Lake Shinji: Corbicula japonica, Corbicula sandal, and Corbicula leana. The most dominant clam in the lake is Corbicula japonica, called “Shinjiko Sijimi” (The Corbicula in Lake Shinji). This corbicula is larger than the other two Corbicula clams. Local people cook and steam these clams with sake, simmer them, and make clam rice with assorted ingredients. The most popular recipe is miso soup with corbicula clams. It is said that this miso soup prevents us from having a hangover. The energetic chefs and companies in the area are trying to develop original dishes with these common freshwater clams.

Takatsugawa River is famous as a cleary-limpid-stream in Masuda city, western Shimane. Ayu lives in the river because they prefer clear water. The fish goes to the sea and back to the river. Ayu grows up to reach from 20cm to 30cm. The fish likes to eat algae, so they have their unique agreeable smell. Ayu is often dried to make a local speciality. Dried ayu is sometimes grilled. Dried ayu is also served in a soup in western Shimane called “the Iwami region.”

Shimane prefecture has its unique good-tasting ingredients: Izumo Soba(buckwheat noodles), Shinjiko Shijimi(Corbicula Clams), and Ayu(sweetfish). These are attracting our appetite.