Mihonoseki – On January 8th, a traditional Shinto ritual took place in Katae, a small fishery town in part of the Shimane Peninsula. Katae Sumitsuke Tondo（片江墨つけトンド）, a festival celebrating a new year while painting black ink – a mixture of charcoal and alcohol – on participants’ faces, has had its tradition for more than 250 years.  It is said that those who smeared their faces with ink never have a cold and might avoid maritime accidents.  This year was the first time in two years because of the covid-19, allowing no one to be painted to prevent the contagious disease.  The festival is unique, so much so that it attracts many visitors during the average year.  Even BBC (British Broadcasting) reported this event in 2010.  Although the pandemic reduced the scale of the ritual, the participants enjoyed the traditional performance.

In the morning, the local people set the two dignified symbol towers made of bamboo, which were decorated with a sacred festoon（しめ縄 Shimenawa), the first calligraphy of the year(書初め Kakizome), and pairs of pine decorations(門松Kadomatsu).  The towers also hoisted many fluttering fishermen’s flags, noticing the neighbourhoods signalling the coming of the new year.  A local myth says that the fishing town’s guardian god would descend through the sanctuary towers during the new year period. 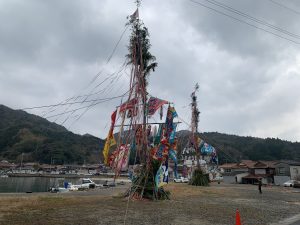 Before noon, the people gathered at Katae Shrine to attend divine service to pray for their perfect health, their families’ safety, safe navigation and good fishing for fishermen.  The locals bowed their heads to respect their god while hearing a Shinto prayer and drinking cups of scared Sake(御神酒Omiki) to purify their bodies and minds.  To purify their bodies and minds is an important procedure of the Shinto ritual.  Then, the leader made a speech that it used two potable shines to overcome the pandemic, hoping everyone carried out the mission without injuries. 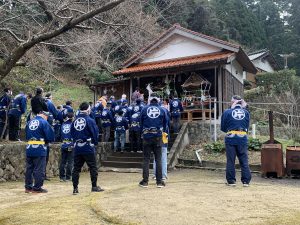 At noon, the two portable shrines, shouldered by bearers who wore the same uniforms for the holy event called Ujiko（氏子）, left the shine’s grounds, starting the parade.  The shrines passed through the town’s streets via the towers’ location and the fishery market.  Despite no black ink paintings this year, sightseers enjoyed watching the parade and having holy Sake and snacks.  Finally, the shrines were heading to the beach to purify themselves by soaking in the sea’s water which must be very cold in the winter.  Also, the leader, members of the local neighbourhood association, and a newlywed’s husband were cast into the sea.  These were celebratory of Katie, which has continued for a long time.

The burning of the tondo towers(except for the flags)  is scheduled to perform on January 10th, meaning the end of the town’s new year. 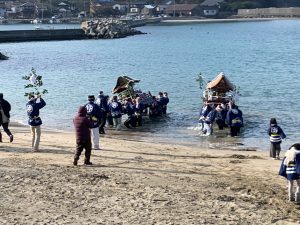 Katae brought the Japanese fishing industry its innovative fishing method, trawl fishing, by two motorized boats about a hundred years ago. The town was also famous for its fishing fleets（片江船団） in the 1950s.  It is said that many fishing boats were filled in Katae Bay, going fishing as far as off the Chinese Continent at that time.  The people in the town even succeeded in such a tradition and a spirit.

Special thanks to Mitsuko Isohara

How to get to Katae( a part of Mihonoseki)

From JR Okayama Station on the Sanyo Shinkansen, take the Yakumo Limited Express to JR Matsue Station (2 hours and a half), then board the Ichibata Bus bound for Mihonoseki Bus Terminal (45 minutes). Transfer to the Mihonoseki Community Bus Shichi-rui Line and get off at “Katae Chuo”bus stop (12 minutes). Katae Shrine is 5 minutes on foot from the bus stop.