Sanin Godo Bank, called Gogin, is one of the excellent Japanese regional banks and is well-reputed in the San’in area, including Shimane. Many Shimane people have Gogin bank accounts. The writer is also a resident of Matsue and has a bank account at the bank. Although the writer has never met with the author, the book is exciting and inspired the writer to write an article on the life of a banker in Shimane and his contribution to our hometown. The banker is Makoto Furuse, the author of the book on the caption and titled Regional Banker( Japanese), and he published his autobiography. His exciting book teaches us the history of Mr Furuse’s life and career as well as the history of Gogin and Shimane. More, the writer’s classmates at his university work for the bank. As a result, the author is interested in this book on Gogin.

Mr Furuse was the president of Gogin, deserved from 2007 to 2011. This Keio alumnus entered Sanin Godo Bank. His career started as a teller engaged in interest calculation at the Matsue Kita branch, now called Gogin Karakoro Hiroba in Tonomach. He competed with Hiroshima Bank for financing at the Matsue Eki-Mae branch as a liaison. One of his significant achievements was helping Fukushima Ship Building, which had a shipyard in Otesenba. The shipbuilding company dealt with the Soviet Union, but the company felt difficulty in doing business with the communist country that had a different custom of the trade from Japan. The liaison dedicated himself to working for the company. Another big project was to reconstruct Sanin Chuo Shinpo(newspaper). The newspaper company was suspicious of a fraudulent account, and the banker found out that the newspaper company did an actual fraud scheme. With the help of Mr Furuse, the executive board of the newspaper company was reformed, and then it accomplished reconstruction.

In 1990 Mr Furse was engaged in dealing with the merger with Fuso Bank, which had its head office in Tottori city but had branches in the San’in area, while working for the Shima Dai Mae branch with his regular tasks as usual. Thanks to his effort, Gogin and Fuso Bank successfully merged on April 1st,1991. 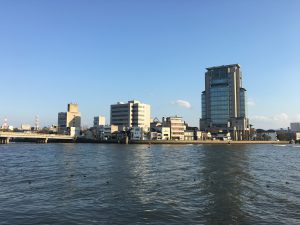 In 1994 Mr Furuse was responsible for reusing PINO Building as the manager of the Eki-Mae branch. The Shopping centre PINO, located in front of the Matsue station, would be closed down. Pino consisted of Jusco, which occupied most of the cored retail shops in the building, and other twenties local shops. Meanwhile, Pino’s rival shop Saty, which was operated by Mycal and now is operated by Aeon retail, was built near Pino. Most customers flew into the new shopping centre: Saty. The sales rate of Pino had declined entirely to a large extent, and eventually, Jusco expressed its closing down. This decision caused the building to be abandoned. The location in the station’s front has been the first-grade place; the ex-Pino building needed reusing. Therefore, The manager Furuse negotiated with  Ichibata Department to use the facility and successfully relocated the department store from Tonomach to the front of the Matsue station. The branch manager had successfully solved the situation that the front part of the Matsue station would be an abandoned building.

In 2007 he had promoted to the president of Gogin and retired from his position later. After retiring from Gogin, he became a chair of the Sanin-India association following a president of the Matsue Chamber of Commerce and Industry.

His effort tells us the importance of contributing to our local neighbourhood and prodding our place: Shimane. The writer offers this article to the outstanding figure in Shimane.